Some big news today from Google regarding their Google Goggles feature. In their latest blog update, they have announced that the Google Mobile iPhone App has been updated with Google Goggles (it already has voice search)! This amazing feature first launched for Android, but now it’s available for iPhone users. Essentially, you search for things by taking pictures with your iPhone’s camera. How incredibly cool and scary!

From the Google blog:

In the new version of Google Mobile App just tap on the camera button to search using Goggles. Goggles will analyze the image and highlight the objects it recognizes — just click on them to find out more. You can see how this works in this short video:

Computer vision is a hard problem and Google Goggles is still a Labs product. It works well for things such as landmarks, logos and the covers of books, DVDs and games. However, it doesnâ€™t yet work for some things you might want to try like animals, plants or food.

Google Mobile App with Google Goggles is now available in the Apple App Store. Just search for â€œGoogle Mobile Appâ€ and download the latest version – itâ€™s free. It will gradually be appearing in all App Stores around the world starting from today.

Goggles is enabled only for English-speaking users, and since it requires an auto-focusing camera it is supported only on iPhone 3GS and iPhone 4 running iOS 4 or above.

The Google Mobile iPhone app update is slowly making its way into the App Store. Keep your eyes out for this cool update!

Update 1: The Googles update is now live in Canada. Check out the screenshots below. Google Goggles identified the box to my Airport Extreme easily. 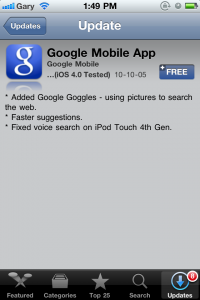 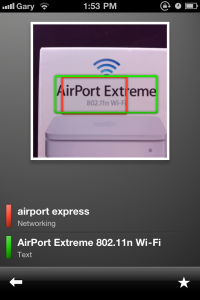