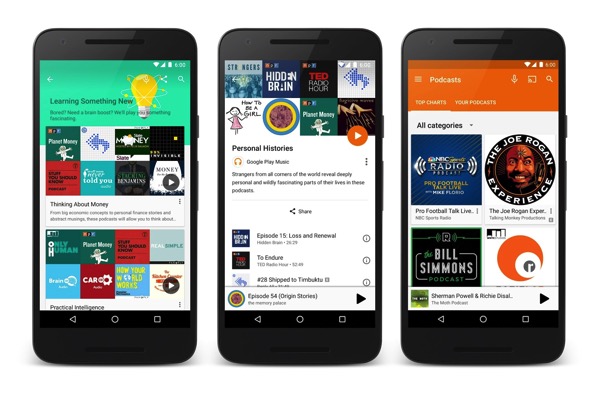 Google has today announced the launch of a new podcast store within the Google Play Music interface, allowing users to search for and subscribe to their favorite shows and then play them everywhere Play Music works. The official blog post says the feature will go live on the web and roll out to Android devices in the U.S. and Canada only, whereas there is no mention of an iOS launch yet.

Try “Learning Something New” to talk about at a dinner party and listen to our favorite episodes from Stuff You Should Know or How To Do Everything. Enjoy a Sunday afternoon by “Getting Lost in a Story” with episodes from Radiolab or Reply All, or relax after a long day by “Laughing Out Loud” to Marc Maron’s WTF or Chris Hardwick’s The Nerdist. If you find something you love, subscribe to download the last several episodes automatically on your device or choose to be notified every time a new episode comes out.

Similar to our contextual playlists for music, we want to make it easy to find the right podcast—whether you’re a podcast aficionado or listening for the first time.

For those who want to make their own podcasts available in Google Play Music, check out the podcast portal for more details.