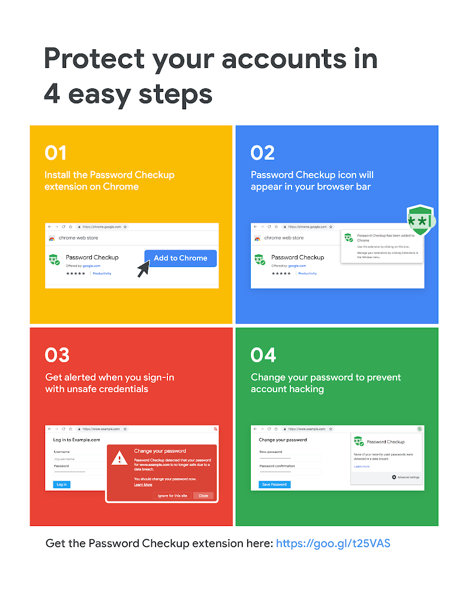 With the new Password Checkup Chrome extension, users can find out if a username and password they use on a website is one of over 4 billion credentials that Google knows have been compromised. The extension automatically triggers an alert and suggests a password change.

Google says due to the privacy-protecting techniques used in developing Password Checkup, no one, including Google, can access your account details. Users can start using it right away by installing the free Chrome extension.

In cases where a hacker may get access to your Google account, the new Cross Account Protection feature can help you quickly get back to safety.

We created Cross Account Protection by working closely with other major technology companies, like Adobe, and the standards community at the Internet Engineering Task Force (IETF) and OpenID Foundation to make this easy for all apps to implement.

When apps and sites have implemented it, we’re able to send information about security events—like an account hijacking, for instance—to them so they can protect you, too. For app developers using Firebase or Google Cloud Identity for Customers & Partners, it is included by default.

Developers can get started today to implement Google’s new Cross Account Protection feature in their apps and websites.