Update: Other users are now seeing this propagate to Google.ca: 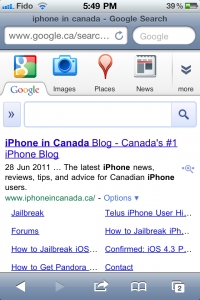 It appears Google is slowly rolling out its revamped mobile search interface, introducing a new bar up top allowing for quick and easy access to Gmail, Reader, Web, and Calendar for Google.ca. These icons appeared this morning in Google Reader on my iPhone, but they don’t show up for Search just yet. The ‘More’ tab brings access to other Google services such as Picasa, YouTube, Google Docs, Google Talk, Maps, News, Tasks, Translate, and Books. 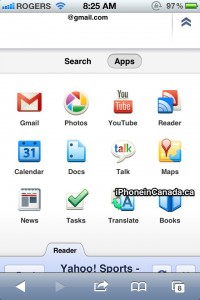 This new interface was first spotted on the web back in late May. The new ‘tabbed’ look brings a tasteful new element to the previously mundane Google mobile site.

Is this new interface appearing on your iPhone?