The search giant has added new voice question capabilities which allows users to engage in smarter conversations with Google Now. After launching the Google Search app, users can start a conversation by saying, “OK Google”. Much like Apple’s Siri, users can now ask more casual questions like, “What’s the weather like?”.

Much like Google Now on Android, users will now be able to ask a follow up question like ” What about this weekend?”. The new Google Search app is now smart enough to recognize a more human-like conversation. In the example above Google Now will know that you are referring to the weather on the weekend. 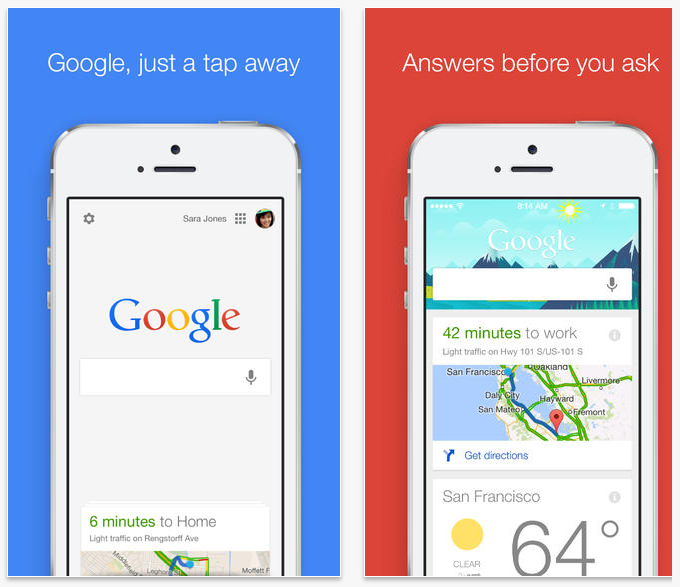 Google Search will now give users more personalized results, informing users about interesting articles on preferred topics, giving information about upcoming trips, and more. The app has also received support for cricket sports cards in Google Now, along with performance enhancements that improves loading times to Google Now and Search.

Here is a full list of features including in the latest version of Google Search for iOS:

With today’s update, you can ask questions with your voice & get updates on topics you care about.

Have a smarter conversation with Google:

• Tap the microphone or say “Ok Google” to start

At Google, we know the web well. With Google Now, we’ll tell you when there’s an interesting article for:

• Your favorite authors and blogs

Apple is expected to announce iOS 8 alongside OS X 10.10 at its WorldWide Developers Conference in June. With WWDC just around the corner, what features would you like to see Apple include in iOS 8? Let us know in the comments below.

Google Search for iOS is available as a free download from the App Store.

Google announced an experimental conversational service based on artificial intelligence today, called Bard, confirming what was reported last week. The details of Bard look to compete against the rise of Open AI’s ChatGPT, with the latter’s inventor backed by a $10 billion investment from Microsoft. On Monday, Google CEO Sundar Pichai detailed more about its […]
Gary Ng
12 mins ago