Google Rolling Out Ability to Opt-Out of New Gmail Design

Google rolled out a new design for Gmail earlier this year, which made it easy to switch between apps like Gmail, Chat, and Meet in one unified location. Now, it is introducing the opt-out experience to a segment of Gmail users. 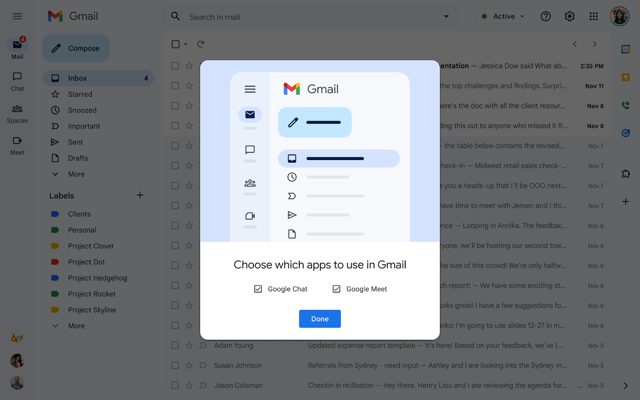 Starting today, select users will see the new Gmail experience by default, but they will still have the option to revert to classic Gmail via the settings menu. The new Gmail view will also continue to be available for users who want to enable it later via Quick settings.

When enabled, the new navigation menu allows you to easily switch between your inbox, important conversations, and join meetings without having to switch between tabs or open a new window.

We hope this new experience makes it easier for you to stay on top of what’s important and get work done faster in a single, focused location.

We’d like to note that the new experience will vary based on your Google Workspace edition. Specifically, if you only have Gmail, you will continue to have a Gmail-only configuration in the new navigation:

The new Gmail design is available to users with personal Google accounts, as well as to Google Workspace Individual users.

Apple is moving the production of its Apple Watch and MacBook to Vietnam for the very first time. In an effort to further diversify its supply chain, Apple is working with its suppliers in order to manufacture two of its pivotal devices outside of China. According to Nikkei, Apple suppliers Luxshare Precision Industry and Foxconn...
Steve Vegvari
46 mins ago