Google Introduces SOS Alerts for Maps to Help During a Crisis 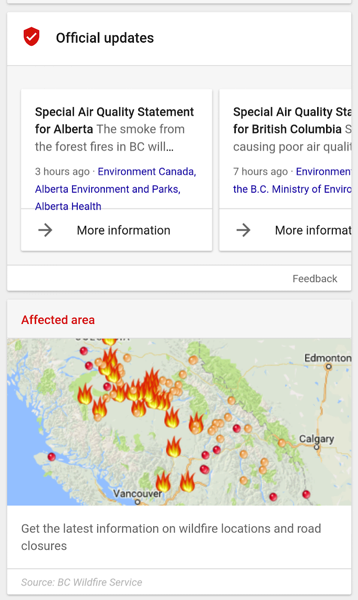 Google has today introduced new SOS Alerts feature for Maps and Google Search, that will assist users in quickly understanding what’s going on and decide what to do during a crisis. Google notes that users will be shown an alert at the top of search results when looking for information about incidents like wildfires, floods or earthquakes.

Here’s how Google describes the new tool on its official blog:

You’ll see maps, top stories and—when available—authoritative local information such as emergency phone numbers, websites, and translations of useful phrases. Depending on how close you are to the affected area, you may also get a notification on your mobile device that directs you to this information.

If you’re outside of the affected area, you may still want information about the crisis. Searches for relevant terms (like the name of the event or the location) will also show an SOS Alert that provides a timely overview of the situation, in addition to features such as donation opportunities.

SOS Alerts will also be visible on Google Maps for iOS. Users will see a specific icon on the map and a tappable card with more information about the crisis, such as helpful phone numbers and websites. The map will also include real-time updates, like road closures and traffic and transit updates.