Google to Reveal ‘Next Dimension’ of Google Maps on June 6

With rumors of Apple dropping Google in favor of its own mapping application in iOS 6, Google has sent out a notification that it will be holding an event on June 6 to show off “The Next Dimension of Google Maps”.

At this invitation-only press gathering, Brian McClendon, VP of Google Maps and Google Earth, will give you a behind-the-scenes look at Google Maps and share our vision. We’ll also demo some of the newest technology and provide a sneak peek at upcoming features that will help people get where they want to go – both physically and virtually. We hope to see you there.

Since the original iPhone in 2007, Apple has been using Google’s map service to provide on-device mapping and GPS. However, as the two company’s have evolved over the years, Apple has been moving more of its iDevice services in-house instead of relying on other companies.

Speculation indicates that the timing of Google’s event is a strategic move that will showcase what Apple users are missing out with Google’s new maps when Apple potentially moves to its own in-house mapping service. 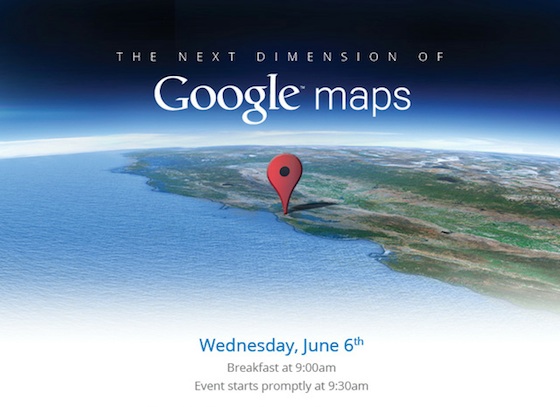