Today, Google updated their Gmail Webapp for iOS with a “connection bar”.

Using Gmail in Safari on your iPhone gives you access to fast search, conversation view, stars, labels, and more. But itâ€™s sometimes frustrating not knowing whether your email has been sent or whether your phone has a functioning internet connection at all. To address this, we recently introduced the â€œconnection bar.â€ The connection bar appears at the bottom of the screen when needed to give you the info you wantâ€” and then gets out of the way.

The new feature better communicates the status of iPhone user inboxes by displaying information for outgoing and sent mail, internet connection, and other alerts.

The connection bar won’t always appear, as it only shows up when specific activity is triggered such as when sending an email from your iPhone when using the Gmail webapp. 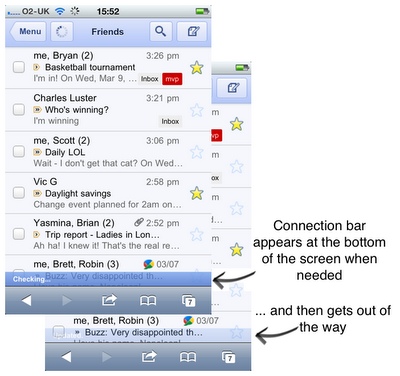