Every time I read about one of these new features for the iPhone from Google, I get excited. Then, when I discover that I’m shut out because I live in Canada, I shed a small tear before crying. Google today released the Google Voice iPhone web app, that functions within Safari on the iPhone. Canadians can get an invite and register for Google Voice, but the service is not available here, yet.

What is Google Voice? Here’s a great summary:

Google Voice is the Internet based phone forwarding service by Google. It was previously known as GrandCentral. Google Voice is free except for international calls.

Google Voice gives you a separate phone number which you can give out as if it is your regular phone number. You can then change your settings to have calls forward to any of your phones.

You can forward to one group of phones during the day and another at night. You can have calls from certain numbers forward differently than calls to other numbers. You can block spamming callers and send some calls straight to voice mail.

You can send yourself an SMS message or an email whenever you get a voice mail message, and you can check your voice mail from the Web or from your phone.

Apple denied Google the chance to create a dedicated Google Voice iPhone app. Why? Because it conflicted with the ‘phone’ function on the iPhone. Being Googlers (some of the smartest people on the planet), they were able to implement Google Voice into iPhone Safari by utilizing HTML5 technology. 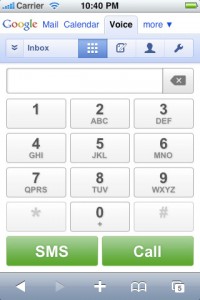 Watch this video demo and have fun drooling:

What do you think? Is this something you would want to use?