Google’s Eric Schmidt: “Apple Should Have Kept Our Maps” 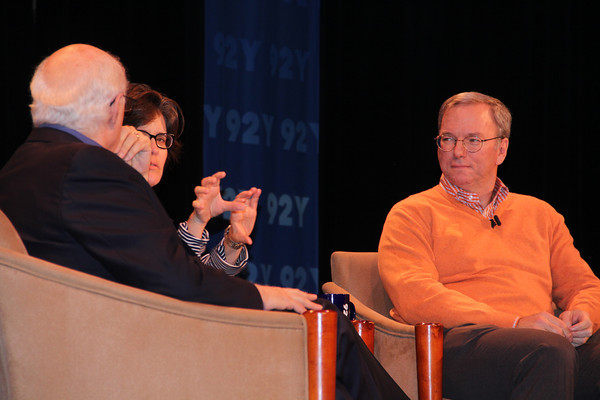 In an interview with AllThingsD tonight in New York City, Google Chairman Eric Schmidt sat down with Walt Mossberg and Kara Swisher to talk about everything including the Apple-Google spat over maps. Here’s a portion of the interview where Mossberg brings up Apple and Google Maps:

8:20 pm: Time to talk about maps. Schmidt: “Apple should have kept our maps”

Mossberg: But Apple says you didn’t give them all the features they wanted.

Schmidt: “Apple decided a long time ago to do their own maps… [now they’ve] discovered that maps are really hard.”

Swisher: What argument could you make to Apple to keep your maps?

Mossberg: Are you going to make your own iOS map?

Schmidt: Dont want to preannounce products but if we made one, they would have to approve it… they havent’ approved all of our apps in the past. [Schmidt allows that two companies are always in communication]

Nothing really new, but interesting to read about to say the least. It’s always fun when Google takes a jab at Apple, as Schmidt notes Apple “has discovered maps are really hard”. Google was rumoured to have submitted a Google Maps app to Apple, but that was shot down. Just last week, Google released Street View to the Google Maps web app, bringing the missed feature back to iOS.

If Schmidt is trying to hint something, it’s that Apple hasn’t approved their submission of Google Maps. But that’s just a hunch based on what we’ve heard so far.

Apple has come under scrutiny for their version of Maps, as it did not meet the high standards users had come to expect from using Google Maps on iPhone since 2007–a feature added at the last minute by Steve Jobs.