Looks like Greenpeace is playing their games again. This time it was a demonstration at Apple’s Headquarters in Cupertino that saw images being projected onto Apple’s main campus building.

The protest was for a “clean” iCloud that included support messages from Greenpeace’s Facebook and Twitter accounts. The group also reportedly barricaded themselves in an “eight-foot tall, ten-foot wide structure that has previously been used to prevent Arctic drilling.” 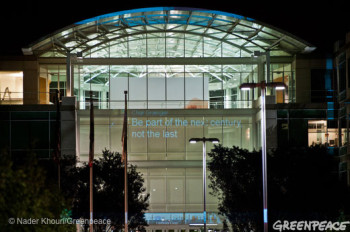 If the shelter thing wasn’t enough, Greenpeace members dressed up as iPhones and marched around displaying messages from their supporters via Facebook and Twitter (this whole thing resembles a circus event if you think about it).

“Apple’s executives have thus far ignored the hundreds of thousands of people asking them to use their influence for good by building a cloud powered by renewable energy,” Greenpeace USA Executive Director Phil Radford said. “As Apple’s customers, we love our iPhones and iPads, but we don’t want to use an iCloud fueled by the smog of dirty coal pollution.”

Apparently over 215,000 people have signed the group’s “Clean Our Cloud” petition that asks Apple to to use clean energy for its iCloud service. However Apple has taken measures to ensure it uses clean and renewable energy. These efforts have been seen in the company’s Prineville, Oregon facility and Maiden, North Carolina facility, the former of which will use 100% renewable energy.

The Dyson V12 Detect Slim makes some significant quality of life improvements while not compromising on power. I’ve been using Dyson vacuums for the better part of three years. Across many of its previous cordless devices, I’ve been thoroughly impressed. Dyson typically delivers when it comes to power and suction. Plus, I’ve often found battery...
Steve Vegvari
37 mins ago