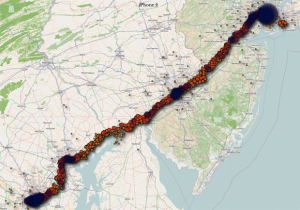 Yesterday news broke that our iPhones have been saving our location info secretly since iOS 4, unencrypted. A temporary fix is available via Cydia, but we’re all still waiting to hear from Apple.

John Gruber’s sources tell him that this tracking is in fact a “bug” and will be fixed in an update:

The big question of course, is why Apple is storing this information. I donâ€™t have a definitive answer, but my little-birdie-informed understanding is that consolidated.db acts as a cache for location data, and that historical data should be getting culled but isnâ€™t, either due to a bug or, more likely, an oversight. I.e. someone wrote the code to cache location data but never wrote code to cull non-recent entries from the cache, so that a database thatâ€™s meant to serve as a cache of your recent location data is instead a persistent log of your location history. Iâ€™d wager this gets fixed in the next iOS update.

Further insight into this issue had been summed up by Andy Ihnatko’s blog.

We haven’t heard from Apple yet, but I’m assuming we will soon. Expect a coordinated response via a press release, or of this snowballs further, a mini press event, a la ‘antennagate’.

How much are you paying attention to this whole location tracking issue?