Apple introduced new in-app subscription policies that have caused quite a stir in the publishing world. We questioned whether the new model will succeed or fail, but at the end of the day consumers will decide. New competition is coming from Google’s One Pass that will undercut Apple’s 70/30 revenue split.

Apple should be taking less, perhaps far less, than 30 percent.

Apple should not require subscription-based apps to use the in-app subscription APIs. If itâ€™s a good deal for publishers, theyâ€™ll choose to use the system on their own.

Apple should not require price-matching from subscription offers outside the app. Publishers should be allowed to charge iOS users more money to cover Appleâ€™s cut.

Gruber makes some interesting points, and compares the App Store to a shopping mall:

…Apple sees the entire App Store, along with all native iOS apps, as an upscale, premium software store: owned, controlled, and managed like a physical shopping mall. Brick and mortar retailers donâ€™t settle for a single-digit cut of retail prices; neither does the App Store.

It’s classic Gruber, and an interesting read nonetheless. Check it out here. 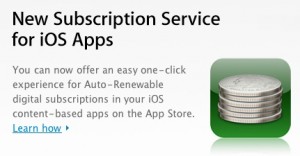 According to a report by Semafor, Microsoft's Bing search engine will incorporate a faster, richer version of ChatGPT called 'GPT-4' into its product in the coming weeks. Citing people familiar with the matter, the source says the latest update of ChatGPT software responds much faster than the current version. The sources also say that GPT-4 offers replies...
Usman Qureshi
7 mins ago

Popular note-taking app Notability has just introduced a new Pencil feature, bringing the most paper-like sketching experience to digital notetakers. This marks the app’s first time releasing a tool that enables users to style their ink strokes, add texture, and change colours after writing without any pixelation. The Pencil tool makes drawing in Notability feel just...
Usman Qureshi
26 mins ago

SaskTel and Stafford Communications are partnering to bring more advanced broadband solutions and faster internet to rural parts of Saskatchewan. Part of the Rural Broadband Partnership Program (RBPP), Stafford Communications plans to expand its network and begin delivering internet speeds of up to 100 Mbps under this collaboration to: Crystal Springs Jumping Lake Struthers Lake Tarnopol...
Usman Qureshi
48 mins ago