Apple first introduced the water pistol to replace the gun emoji in iOS 10 during the fall of 2016, and fast forward to present day, all major companies have similarly made changes to adopt to changing over the controversial emoji.

Earlier this week, Google swapped the gun emoji on Android with a water gun, while Microsoft and Facebook similarly followed suite.

According to Emojipedia, all major vendors have now made the change across the board:

It took a while, and then it happened all at once.

In the days since Google started rolling out a new pistol emoji to Android users earlier this week, we’ve now seen redesigns from Facebook and Microsoft which join other platforms that had already made the switch including iOS, Twitter, Samsung and WhatsApp.

The result is that the code point for ? U+1F52B PISTOL that once showed a weapon on all major platforms is now a water pistol across the board.

Check out the image below, showing the evolution of the gun emoji by year from Apple, Google, Microsoft, Samsung, Facebook and Twitter (note how Microsoft at one point changed their zapper to an actual gun): 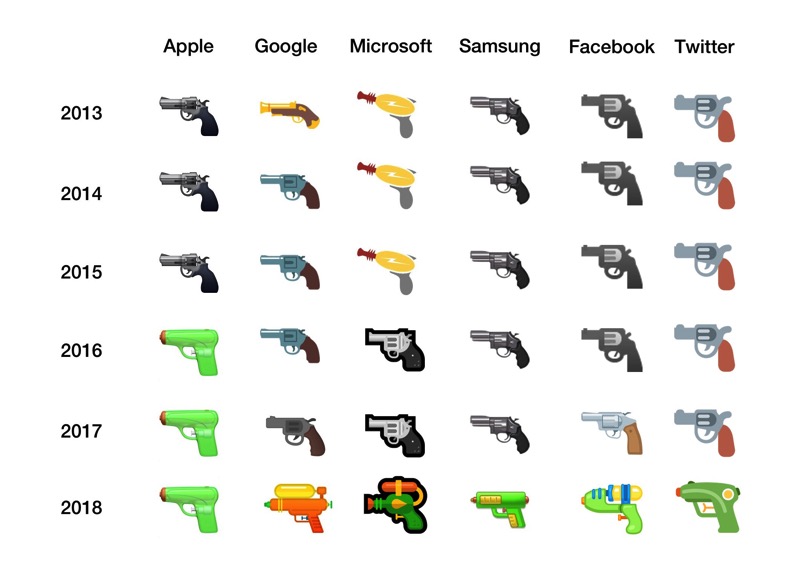 Why the change? Given recent high profile shootings in the U.S., tech companies clearly do not want their emojis to be associated with gun culture.