Microsoft’s Surface tablet has been hacked by programmer Steve Troughton-Smith to run an early version of Mac OS. The hack is based on a jailbreak tool released by hacker Netham45 and allows the Mac OS to run inside Windows RT (via VentureBeat). 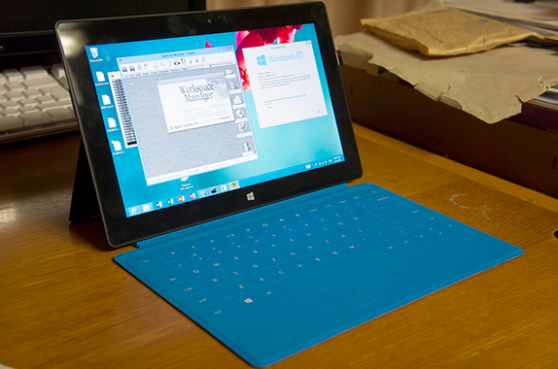 By exploiting a setting in the Windows RT, hackers have released a jailbreak tool that simply runs and unlocks the Microsoft Surface OS. Interestingly Microsoft isn’t too concerned with the hack, and in fact seems to appreciate it. The company said on Tuesday. “we applaud the ingenuity of the folks who worked this out and the hard work they did to document it”.

While there don’t seem to be many immediately useful applications for the Mac OS hack, the entire project is an interesting proof of concept for what can be done with both Windows RT and the Surface. Vibrant hacking communities often develop around easily hackable devices, even if the devices themselves don’t sell particularly well. Just take a look at the HTC HD2, which hackers love because they can’t install just about anything on it.

Unless Microsoft patches the flaw soon, it shouldn’t be long before Windows RT develops a healthy homebrew community for desktop apps.

Just ahead of HBO’s highly anticipated premiere of Game of Thrones prequel series House of the Dragon, a new House of the Dragon: DracARys augmented reality app has been released to download for iOS and Android. Available in English and French, the app offers an immersive, free-roaming AR experience, and allows fans to hatch and raise their own...
Usman Qureshi
11 hours ago

On Monday, Bell Media announced veteran CTV news anchor, Lisa LaFlamme was being let go by the company. Coinciding with Bell’s announcement, LaFlamme broke her silence in a final “sign off” on Twitter, a video that has since racked up 3.8 million views. Her firing has made international headlines in the past 24 hours. LaFlamme,...
Gary Ng
12 hours ago

According to a CTV News report, a coalition of Chambers of Commerce representing border communities is calling on the federal government to scrap the ArriveCan app requirements for travelers crossing the border. A Statistics Canada report shows U.S. visits through land ports are still down significantly across the country. The border-city mayors are therefore also asking...
Usman Qureshi
12 hours ago