Update 1: It also appears Apple has had their sights on this location since last November, as noted by The Chronicle Herald. Their interview with the mall’s marketing director resulted in Apple-like secrecy. She refused to divulge the genre of the store or whether the new tenant had an existing American or Canadian or local presence.

What was revealed though is the space will occupy 7000 square feet, an expected 2012 Fall launch, and that the removal of an existing elevator could be part of the renovations. Hmm…what company would could force a mall to remove an elevator? I can only think of one–Apple.

A picture of the construction area within the Halifax Shopping Centre where the Apple Store is being proposed was sent our way (thanks @durwin!): 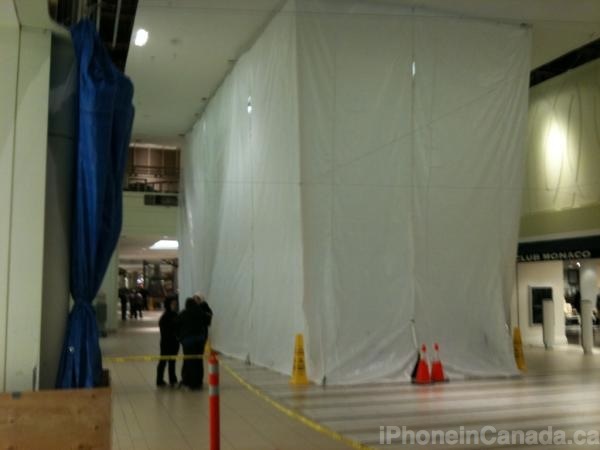 If this latest rumour proves true, it appears an Apple Store could be arriving at the Halifax Shopping Centre in Nova Scotia. Two separate eastern news sources have received independent tips about this upcoming store (The Coast, AllNovaScotia), and now ifoAppleStore provides details on the possible location of the Apple Store within the mall:

According to the allNovaScotia.com Web site (sub.), the future store will appear near the Sears store, in an area that’s been under construction since mid-November. Workers are reportedly relocating an escalator and building a mezzanine level where the Apple store will eventually appear. The mall was renovated in 2007, and recently has been adding several upscale retailers to serve the province’s one million residents.

A total of 22 Apple Stores are located within five provinces only: BC (4), Alberta (4), Manitoba (1), Ontario (9), and Quebec (4). Could Nova Scotia could join this exclusive list?

Previous rumours noting upcoming 2012 Apple Store openings include locations at Masonville Place Mall in London, and store on Robson St. in the heart of downtown Vancouver.