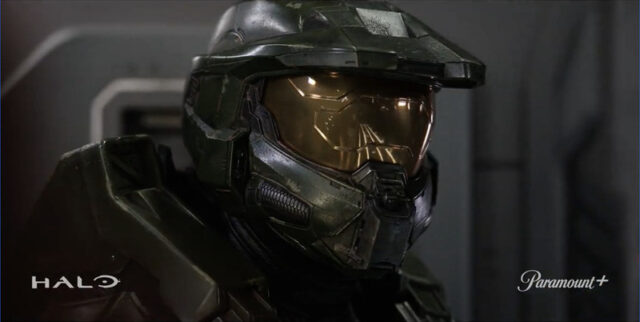 Paramount Plus debuted a new trailer for the upcoming live-action ‘Halo‘ series. The series based on the iconic Xbox franchise is set to begin streaming on March 24.

The Halo TV series is said to be establishing its own canon, meaning it will serve as an entry point for newcomers. The show will not be directly tied to the long-running game franchise which started in 2001. However, the series will keep the focus on Master Chief and AI construct Cortana.

The two-minute-long trailer gives us plenty of shots of Master Chief in his armour, fighting the alien Covenant forces. We also catch glimpses of other Spartan soldiers working alongside the UNSC. There are also brief shots of Covenant leaders the High Prophets and of course, Cortana herself.

Halo stars Pablo Shreiber, best known for his work on ‘American Gods’ as Master Chief. Jen Taylor will be playing Cortana. Taylor has been voicing the character since Halo: Combat Evolved in 2001. Natasha McElhone, who was originally cast to play Cortana, will star as scientist Dr. Catherine Halsey.

The Halo series has had a tumultuous production cycle. Originally, Steven Spielberg was signed on to produce the project which was to be released in 2015. It was then delayed to 2019 as Spielberg dropped out. It is now developed by Kyle Killen and Steven Kane. Both have writing credits for the series as well. However, Killen left the project during production with Kane taking over as sole showrunner.

The series is set to have a total of ten episodes, all with a runtime of 60 minutes.

Paramount Plus is available in Canada for $5.99 CAD / Month.

As Canadian Tire turns 100, it is entering the world of virtual reality (VR) with a Virtual Tree Decorator and a limited-edition 100th-anniversary NFT. The Virtual Tree Decorator is a virtual reality experience that lets you experiment with Christmas tree decor online and bring your dream tree to life. You can design your magical Christmas...
Usman Qureshi
57 mins ago