Siri and Other Hands-free Technologies are Dangerous for Drivers [Research] 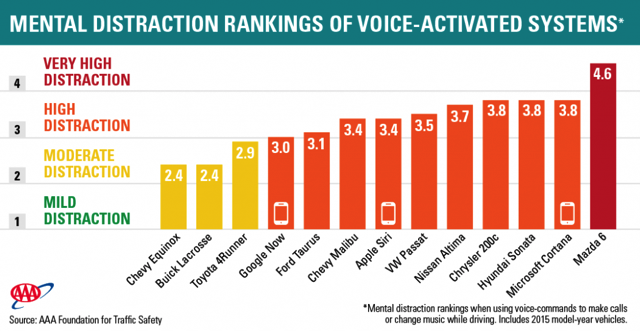 According to a new research by the AAA Foundation for Traffic Safety, potentially unsafe mental distractions can persist for as long as 27 seconds after dialing, changing music or sending a text using voice commands. The results of the research are raising unexpected new concerns regarding the use of phones and hands-free systems while driving. The study has found out that newer hands-free technologies, including Apple’s Siri, can mentally distract drivers even if their eyes are on the road and their hands are on the wheel.

“The lasting effects of mental distraction pose a hidden and pervasive danger that would likely come as a surprise to most drivers,” said Peter Kissinger, President and CEO of the AAA Foundation for Traffic Safety. “The results indicate that motorists could miss stop signs, pedestrians and other vehicles while the mind is readjusting to the task of driving.”

Researchers say that at the 25 MPH speed limit in the study, drivers traveled the length of nearly three football fields during this time. When using the least distracting systems, drivers remained impaired for more than 15 seconds after completing a task. Marshall Doney, AAA’s President and CEO, says that drivers should use caution while using voice-activated systems, even at seemingly safe moments such as when the car is stopped at an intersection. “The reality is that mental distractions persist and can affect driver attention even after the light turns green”, he said.

As you can see in the chart above, Apple Siri earned a distraction rating of 3.4, slightly higher than Google Now’s rating of 3.0, though both fall in the category of ‘High Distraction’.

How often do you find your self distracted using hands-free systems while driving?