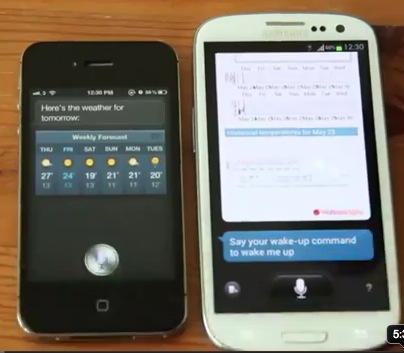 The Verge has posted a comparison video that puts Apple’s Siri versus Samsung’s S Voice. The latter was introduced by Samsung when they debuted their latest flagship Android smartphone, the Galaxy S III. Early on many noted S Voice ‘resembled’ a clone of Siri on the iPhone 4S. Cosmetics put aside–how do both of these voice assistants compare when they are put head to head?

Check out the video below and see for yourself:

A recent trip to the U.S. enabled me to experience the full capabilities of Siri, versus her lack of location services in Canada. It was actually quite handy asking for directions and seeing results come up when asking for coffee shops or restaurants. Let’s hope Siri receives Canadian localization soon–maybe at WWDC 2012?