With the release of iOS 8 beta 3, Apple has included support for the iPhone 5s’ M7 coprocessor to its Health app for data sourcing, as pointed out by 9to5Mac. The M7 motion coprocessor, which is also embedded in iPad Air and iPad mini with Retina display, can help the app track movements like most fitness trackers do, without having to buy any extra accessories. 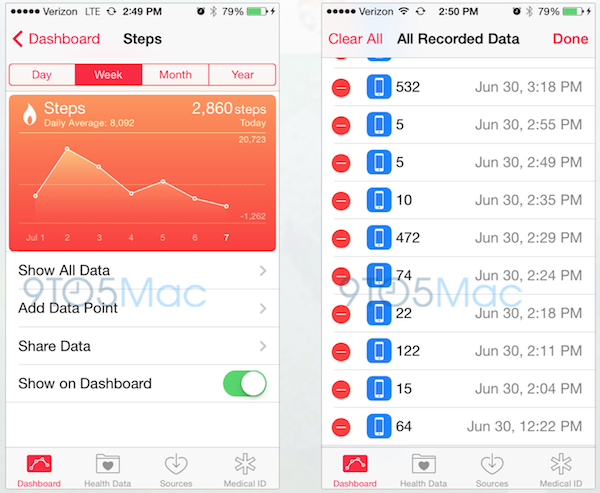 The Health app’s steps counter tab can now report steps without connecting to any third party applications or hardware devices. The M7 motion coprocessor has been used by many different third-party apps, such as Nike’s fitness tracking app and RunKeeper, but this is the first time data gathered from the coprocessor has been made available from Apple’s own Health app.  It is also the first time the data has been able to be integrated since the release of the first beta.

“Users will find that the M7 is able to pre-populate the Health app with a full week of data. We’ve tested the steps counting after clearing the data to 0 steps and the tracking functionality appears to work well and accurately. The Health app allows users to sort data by Day, Week, Month, and Year, and users are able to remove individual sets of Steps tracking from the app. Sharing steps data with other apps from the App Store is also supported.”

Since steps is one of the more mainstream categories of fitness data, the ability for the iPhone to provide that data out of the box is a great way to teach people about the Health fitness tracking software.

Amazon is holding a virtual event right now, announcing new devices this year ahead of the holiday season. The first announcement was the new Kindle Scribe, which is the company’s largest e-reader that now includes writing capabilities. Kindle Scribe has a 10.2-inch 300-ppi HD display that’s also front-lit, and the included pen “never needs charging.” […]
Gary Ng
35 mins ago

Apple has kicked VK, Russia's take on the social media network Facebook, off the App Store globally to comply with the latest tranche of British sanctions — reports The Guardian. VK, formerly known as VKontakte, said on its website that the mobile app would continue to work on smartphones it was already installed on. However,...
Nehal Malik
37 mins ago