The Wall Street Journal has published the proposed verdict forms for the jury submitted by both Apple and Samsung. After taking a quick look at both forms, they are complex and the task of deciding the winner or loser out of this high profile tech trial will not be easy.

Apple’s verdict form has 23 questions, ranging from YES or NO answers either in favour of Apple or Samsung. Some of the most complicated parts of the form include where jurors need to indicate YES or NO to determine if the massive list of Samsung devices infringe on Apple patents. The question we all want answered, should the jury side in Apple’s favour?

“What is the dollar amount that Apple is entitled to receive from Samsung on the claims in which you have ruled in favor of Apple?” 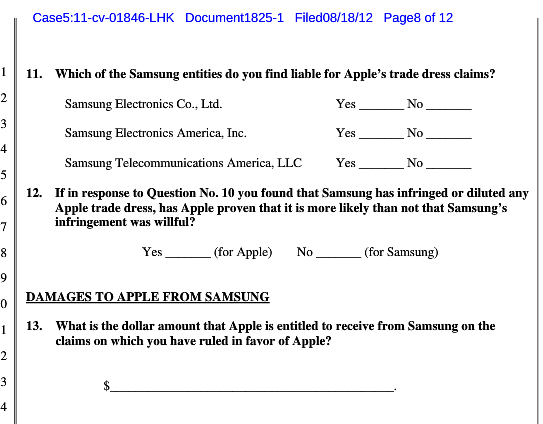 Samsung’s verdict form consists of 33 questions and is in a similar format. These forms won’t be easy to fill out.

Taking a look at both verdict forms, this is not going to conclude quickly as the jury will surely take their time to deliberate a final decision. Check them out embedded below via Scribd:

Earlier we noted Apple CEO Tim Cook was to speak with Samsung’s CEO about a possible settlement, but as of now the attention is on the jury’s final verdict.