Here Is a Breakdown Of iPhone 5 Component Costs [PHOTO]

Just days prior to the September 21st release date, we posted a virtual teardown of the iPhone 5. It revealed that each unit cost Apple $199 in components and an additional $8 for the labor. Whether those ballpark figures were correct, we will find out in this post.

The Wall Street Journal found that component expenses on the iPhone 5 totaled $197, just $9 above what Apple was billed for iPhone 4S components. The large reasoning behind the higher bill is the larger display and in-cell technology added to the device. In fact, those components cost an additional $7 compared to those in its predecessor. 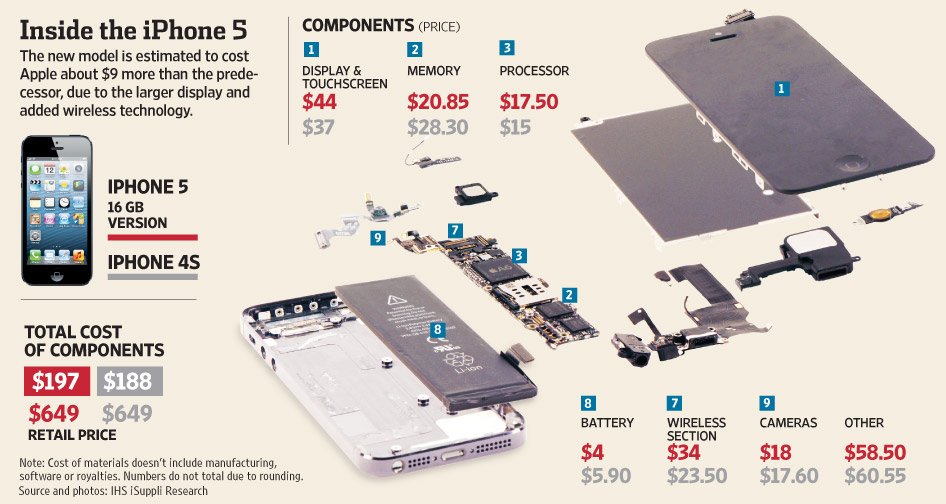 If the pricing for the display wasn’t stunning, maybe the fact that the LTE & Wi-Fi radios cost $11.50 more on the iPhone 5 will be surprising. What really went down in cost was the memory, hiking down $8 on the iPhone 5.

IHS iSuppli, the researchers behind the graph shares their thoughts: (via WSJ)

“Most other phones built for LTE had much bigger displays, and everything else inside them got oversized,” said Wayne Lam, who worked on the IHS analysis. “That pushed the material costs higher.” Apple’s Retina Display on the iPhone 5 is the same width as the display on the 4S and about a half-inch longer.

A few other components, including the camera and processor had seen a hike in pricing by just a dollar or two. The battery and a range of other random components dipped in price by a total of near $4.

Does anything on the graphic above surprise you? I couldn’t believe that a processor upgrade that cost $2.50 was able to more than double the iPhone 5’s speed.