As the jailbreak community can finally set their iDevices free thanks to evasi0n, the Evad3rs’ untethered jailbreak tool for iOS 6, a fresh wave of rumors surfaced on Apple’s new music streaming service, thanks to an interesting discovery made on jailbroken iPads. 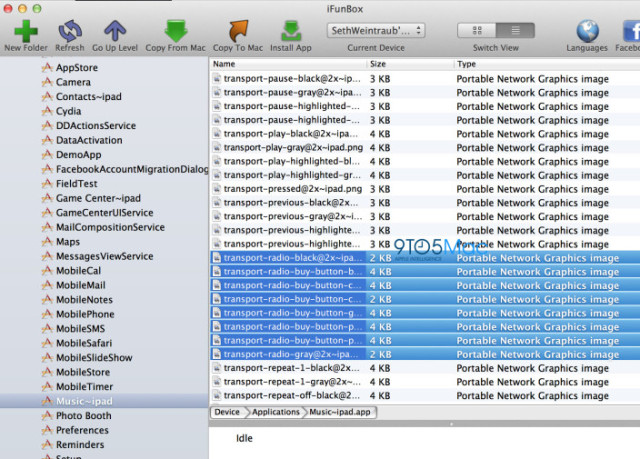 According to 9to5Mac, the iPad’s music app on iOS 6.1 hides a set of “radio button” files with an icon that looks similar to the radio logo you can see on iTunes for Mac. In addition, these buttons seem to contain the word “buy” in their filename, though it’s interesting to note that they only appear on jailbroken iPads and not iPhones.

If you own an iPhone or iPad, you may already know that you need to download third-party apps such as TuneIn Radio to listen to your preferred radio station on your iDevice using an Internet connection. Yet Apple seems to be interested in incorporating a streaming service similar to Pandora or Spotify, and last year the iRadio rumour was reinforced by the New York Times and Bloomberg.

Bloomberg reported, that the negotiation talks are gaining steam, and even projected the launch for Q1 of 2013, but after that the rumour mill became silent. Does this mean we will benefit from an iRadio service? Hopefully, yes!

Zellers was an iconic discount retail chain in Canada that was acquired by Hudson’s Bay Company in 1978, then later shuttered in 2013. But now a decade later, HBC says it is bringing back Zellers from the dead, announcing on Wednesday it will be returning in “early 2023,” in the form of a new e-commerce...
Gary Ng
10 mins ago