It seems that Engadget has got their hands on the press release of upcoming Parrot AR.Drone 2.0 ahead of its unveiling at CES Las Vegas 2012, which will reportedly feature a 720p camera, video recording, a new piloting mode and more. AR.Drone 2.0 is an update to the iPhone controlled high-tech quadricopter developed by Parrot, a global leader in wireless devices for mobile phones, that can be controlled by Wi-Fi using a smartphone or tablet. The new drone sports a brand-new look (pictured below) and increased stability in addition to an HD camera. 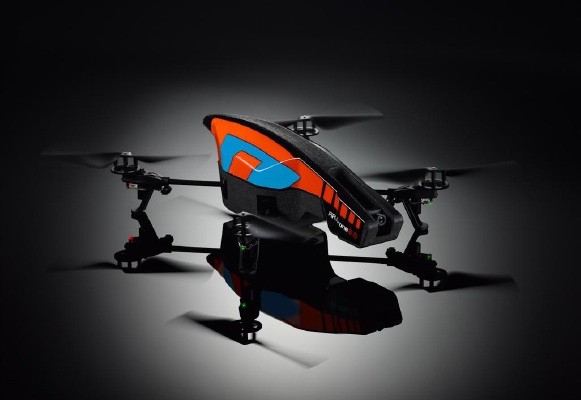 Below is the official press release:

While in flight, the Parrot AR.Drone 2.0’s front camera transmits real-time what the quadricopter sees onto the pilot’s device screen.

For the first time the AR.Drone 2.0 camera, with a 1280×720 resolution, shows a view from the sky in high definition with smooth and unbelievable images.

The pilot enjoys an experience like never before, as if he was on board. For gaming purposes, this camera also can recognize specific shapes and colors to show augmented-reality elements on the smartphone’s screen.

Thanks to the new AR.FreeFlight 2.0 piloting application, players can record their own HD videos and watch them or share them with the AR.Drone community.

Additionally, with the “travelling” feature, the pilot can film HD video sequences like a professional! Simply select the direction of travel (forward, back, sideways) and the duration, and the AR.Drone 2.0 does the rest.

In addition to flying the AR.Drone, new application AR.FreeFlight 2.0 – available to download for free from the AppStoreSM and AndroidTM Market – offers players a new interface and several options.

. FreeFlight: Access to the piloting application.
. The pilot can record flights, take HD videos or photos and save them in the piloting device. All the flight data (altitude, speed, duration and place) can be saved, checked by the pilot and shared with the community.
. Guest Space: Access an overview of the AR.Drone 2.0, the best flight videos and practical information.
. Drone Update: Access the AR.Drone 2.0’s free software updates.
. AR.Drone Academy: Get geolocation data of the best flight zones, watch other pilots’ videos and access their shared flight data.
. AR.Games: Access applications/games available for the AR.Drone.
. Photos/Videos: Directly access your own videos and photos. Watch or upload to YouTube for the community to enjoy.