History of Apple 3.0 Poster is a Must-Have For Every Apple Fan [PICS]

The folks over at Pop Chart Lab have unveiled the Insanely Great History of Apple 3.0 poster, which is a detailed timeline showing every product Apple has ever released. 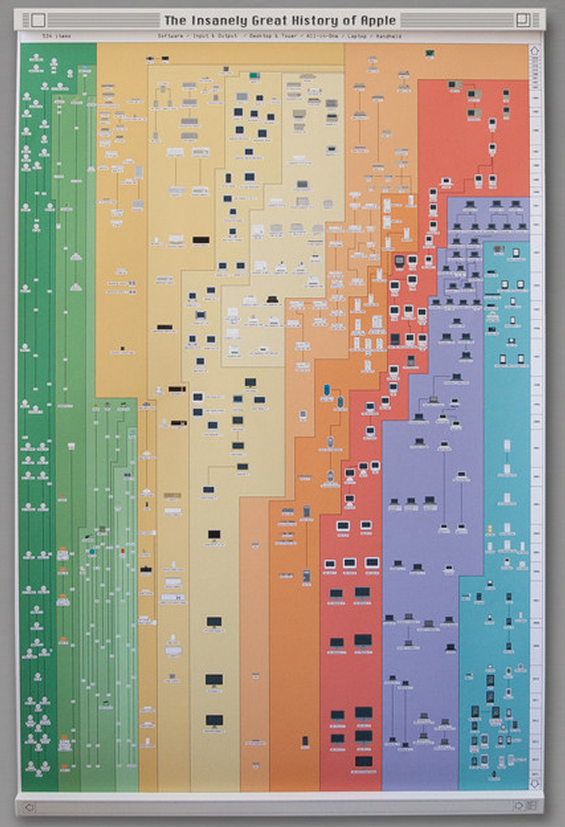 The 28-inch x 42-inch Apple 3.0 poster includes every computer, smartphone, tablet, software package and every other product Apple has released since the company was founded in 1976. The poster even includes Apple’s new iPad Air 2, Retina 5K iMac, and the upcoming Apple Watch.

“Newly refreshed with a bevy of recent Apple products including the iPad Air 2, iMac with 5K Display, iPhone 6, and even next year’s Apple Watch, the world’s most comprehensive mapping of Apple products is back, and is now printed on demand on beautiful exhibition canvas! This classic gallery of proprietary gadgets displays every computer, handheld, peripheral, software, and operating system released by Apple from 1976 onward. Over 500 items in all, chronicling how Apple has invented—and reinvented—insanely great products.

The poster is available for pre-order starting today from their website for $80 and will begin shipping on Wednesday, November 5. You can view the full image and zoom in on all its contents by visiting the link below.