The G & G Thunder hockey team paid a visit to the Avens seniors home in Yellowknife earlier this week, pooling their iPods, iTunes cards and bottle drive money, and bringing it all down to the residence. According to CBC News, the team got inspiration from a recent report about 53 seniors with dementia sharing a single iPod as part of a music and memory program. “We were moved by the story and thought it wasn’t right that the seniors were all sharing one iPod for their program,” said team organizer April Desjarlais. 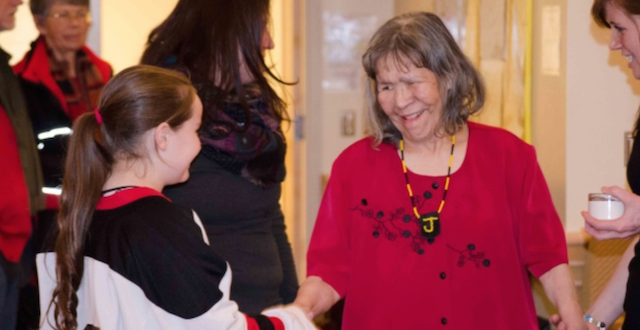 Desjarlais said that the team has donated eight iPods, an iPad, $300 in cash and almost $300 in iTunes gift cards to the seniors. The team’s coach added that the the kids didn’t want to just do a simple handover. Avens’ recreation supervisor Kate Drexler accepted the gifts and said she was moved by the youngsters’ generosity.

“The seniors are really finding something through music and we’ve got a lot of talented kids on this team outside of hockey, so why don’t we go and give them the real gift of music,” says coach Shawn Talbot. The nine- and 10-year-old put on a Christmas concert, with some kids on the team dancing, playing music on different instruments, and following it with a team performance of  “O Canada.”

The Avens’ supervisor revealed that other members of the community have also donated a number of iPods and headphones since the report.