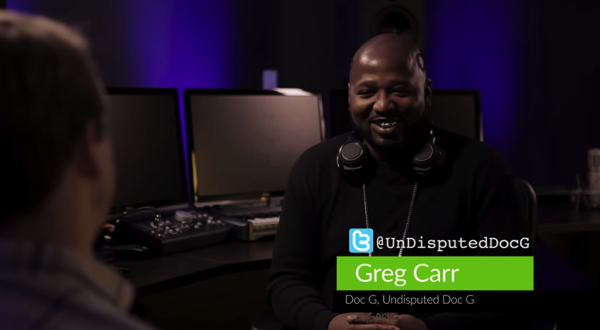 We all know that if you pay the right price, performance artists are willing to become “your brand ambassador”. HTC isn’t the first and won’t be the last to use such marketing tactics, but the latest rap video is horrible: To put your lousy marketing fluff in the words of a rap artist – and his willingness to do that – is disgusting.

The music video – Doc G’s HTC Anthem “Hold the Crown” w/ David Bruce, allegedly written by rapper Greg Carr, known as “Doc G.” – was published on HTCAmerica and has only one purpose: to make fun of the smartphone manufacturer’s biggest competitors Apple and Samsung.

The song’s lyrics sound like the worst marketing text ever written by some furious HTC marketing copywriters as they make jokes about the iPhone’s inferior performance (“Your chip is slower”) and praise HTC’s superior performance.

When I watched the video, I thought, “Okay, this can’t get worse”. Well, I was wrong. The same HTC Marketing guy, David Bruce, “interviews” Doc G. Well, I can’t believe a word the rapper says, as it all sounds like a lousy script written by HTC. Don’t believe me? Watch it for yourself.

Y’all can’t be serious man!
Y’all trying to bite us?
You know what I’m saying?
It took y’all six years to get what we got in two years!

You don’t know who we be?
We’re HTC and we’re about to say it loud!
HTC we hold the crown!
Word to Peter Chou!

Tried to bite our frame, but you’ll never steal or take away our name, baby,
look here, and listen.

You’re smartphone scared,
Don’t want to clash with a Titan,
They saw that M8 debut,
They became enlightened.
Where I’m from, you don’t ever get respect for biting.
HTC One M8 is the best,
You are all invited.

Your phone was all glass,
Why you change your tune now?
Your chip is slower,
Plus you’ll never touch our BoomSound.
More than a few clowns stole what we originated,
We own the universe, your Galaxy is overrated.
It took you copycats six times to get it right,
My One M8 is far too great, you’ll never touch its light

Gorilla Glass 3, Duo Sensor, dual speakers,
HTC is MVP your smartphone’s on the bleachers,
Internal battery strong,
But if my power’s low,
I stay alive with Extreme Power Saving Mode,

Make like them nerdy bloggers
Put it in your pocket now,
HTC cannot be beat,
Help me say it now!

HTC, HTC,
I say it loud,
HTC, HTC,
You know that we hold the crown,

Yeah, HTC,
The greatest smartphone ever created baby,
One M8,
Far too great for y’all competition,
So stop, look and listen,
I say it loud,
We hold the crown,
My word to Peter Chou.

IKEA and Sonos announced on Thursday the launch of the new SYMFONISK floor lamp speaker, adding yet another product collaborative product to market. This latest SYMFONISK floor lamp offers high-quality sound from Sonos, but with IKEA design to blend into your home. This is the newest product from IKEA and Sonos, after the companies debuted their […]
Gary Ng
20 mins ago