Green Dot, the U.S based prepaid card issuer and the regulated bank partner for Apple Pay, has detailed how Apple’s P2P money transfer service launching this fall, will actually work (via Bank Innovation). In their earnings call for the second quarter ended in June 30, Green Dot CEO Steven Streit updated the investors regarding developments on Apple Pay partnership. 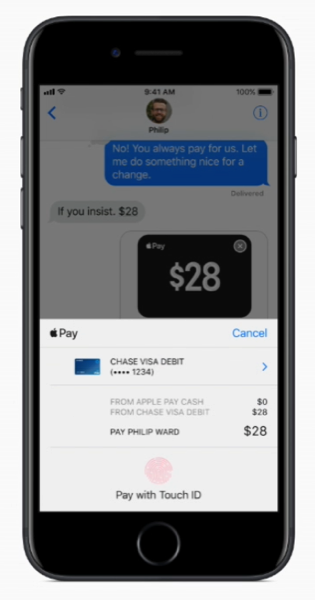 Here’s what Mr. Streit shared during the earnings call:

Green Dot will serve in the role of merchants of record that accepts credit and debit card using Apple Pay to fund person to person money sending transactions. Then when users receive money in Apple Pay Cash, their money is securely kept in a Green Dot bank issued Apple Pay Cash account that is then available for the recipient to spend with Apple Pay in stores, in apps and on the web, or they can send it to someone else, or transfer to their bank account.

At a high-level, the business model is that, as the issuing bank for the Apple Pay cash account, Green Dot generates interchange revenue when customers use Apple Pay cash to spend the fund.

On the expense side, we’ll have the merchant processing expenses to accept the Apple Pays, where the merchants on the funding side of the transaction, plus the typical program management expenses we generally incur on any of our private label program. In any event, we do not expect the program to have a material impact on our financial performance for the remainder of this year.

Mr. Streit also warned the investors that they should not “expect any material impact” on Green Dot’s financials for the rest of the year as a result of that partnership. For the second quarter ended in June 30, the bank reported a 28% increase in  total operational revenues to $222.5 million compared to $173.5 million in the same quarter last year.

Apple Pay’s P2P money transfer feature will debut with iOS 11 this fall, initially in the United States, with no word yet on a Canadian launch.

According to Bloomberg’s Mark Gurman, he believes Apple may not hold an October event to announce Mac and iPad Pro updates with M2 chips. The M2 chips were unveiled at WWDC this summer. Does Apple have enough new features still hiding to justify holding an October event with the media? “It seems unlikely,” says Gurman. […]
Gary Ng
8 mins ago

The experts over at iFixit have just published their teardown of the Apple Watch Ultra on YouTube, calling it “beautiful, rugged, and almost repairable.” The all-new Apple Watch Ultra officially went on sale on Friday, debuting the biggest change to Apple Watch yet, with the watch sporting features targeting extreme athletes. It’s designed to compete...
Usman Qureshi
21 mins ago