How Apple’s Accountants Calculated the $2.5 Billion Samsung Owes Them

CNET reports on some interesting information in the ongoing tech trial of the decade, Samsung versus Apple. According to Apple, they allege Samsung owes them $2.5 billion based on selling clones of their iPhone and iPads. Today in court, Terry Musika, a certified public accountant reports on how the $2.5 billion number was calculated, which was very complicated:

The data used comes straight from Samsung’s sales numbers for its smartphones and tablets, revealed earlier this month. Market share numbers were cross referenced from both Apple and Samsung from recent IDC research.

Musika notes a team of 20 people consisting of programmers, statisticians, and CPAs created a program to come crunch the numbers. In total, the group spent about 7,000 working on the final number, which cost $1.75 million. Musika joked “I can assure you, it’s not me sitting at a desk with a calculator, doing calculations.”

Musika notes Samsung could owe up to $2.75 billion on the high end. Below is a chart of how the “Reasonable Royalty” was calculated: 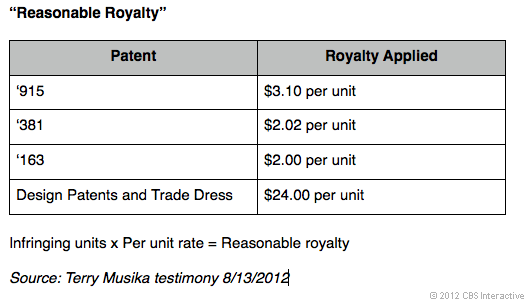 Sounds complicated, considering all the models Samsung continues to churn out.

According to a report from Bloomberg's Mark Gurman, Apple is parting ways with its Vice President of Procurement, Tony Blevins, after the latter was filmed making an inappropriate joke in a viral TikTok video. Blevins was one of Apple's top supply chain executives and one of Tim Cook's most effective cost cutters. Most recently, he worked...
Nehal Malik
3 mins ago