Tech reviewer Marques Brownlee, who attended Apple’s iPhone 6s / 6s Plus launch event in San Francisco earlier this week, managed to get some hands-on time with both devices after the key note. Interestingly, a screen grab from his short video review, captured and shared by BGR, seems to have answered the question of exactly how many minutes of 4K video can one shoot and store on a 16GB iPhone. 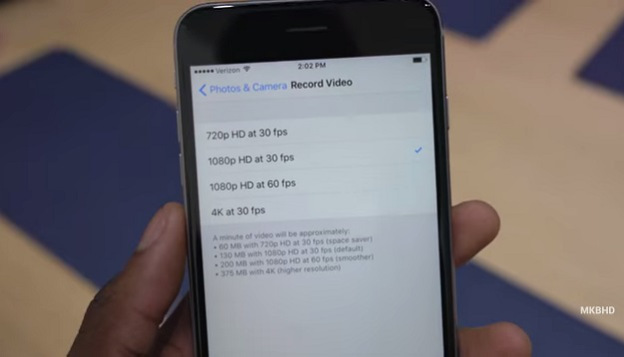 While 4K video shooting capability is one of the more impressive camera features in the new iPhone models, it must be kept in mind that all of that high-resolution clarity comes at a high storage price. As you can see form the above screenshot of iPhone’s video preferences page, it states that each minute of 4K video taken at 30 fps will occupy approximately 375 MB of storage, which is actually more than 2x the amount of storage space a video taken at 1080p and 30 fps takes up. Using this info, the source has calculated the length of 4K video that can be shot using a 16B iPhone 6s.

But before we get started, it’s worth highlighting that new iPhone models doesn’t truly come with 16GB of free space right out of the box. Let’s assume that a brand new 16GB iPhone 6s will, in practice, only have about 13GB or storage for users to play around with.

So there you go, a 16GB iPhone 6s can shoot and store just over half an hour of 4K video, provided no third party apps are installed on its roughly 13GB of storage space.