Five years ago Apple’s market cap was worth $60.5 billion. Other tech titans Microsoft, IBM, Oracle, Google, Cisco, HP and Nokia were worth more. Royal Pingdom breaks down the growth of Apple, and also the decline of others in the following graph: 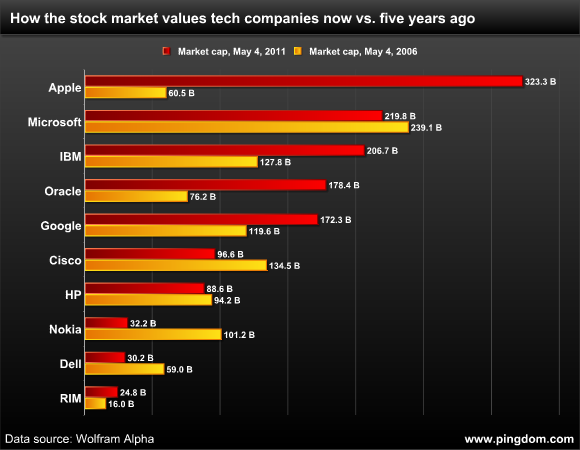 The biggest losers are Nokia and Dell. It’s tragic to see the decline of Nokia, as previously I enjoyed their phones immensely. Their partnership with Microsoft hopes to turn the tide soon.Â

Looking at the numbers, the incredible turnaround by Apple is nothing short of amazing. Nobody saw this coming and it wasn’t until the announcement of the iPhone in 2007 did Apple start to innovateÂ with iOS and introduce new products like the iPad.Â To grow your market cap 5x in five years is just insane. Now, why didn’tÂ I buy Apple stock when the price was hovering around $90/share during the height of the recession?