How to Hide Stock Apple Apps in iOS 9.3 Beta

Apple pushed iOS 9.3 Beta 1 to the developers yesterday and it seems the new version allows users to easily hide unwanted stock or system apps from the homescreen, something that hasn’t been possible without using jailbreak tweaks in the past (via CultOfMac). Here’s what you need to do: 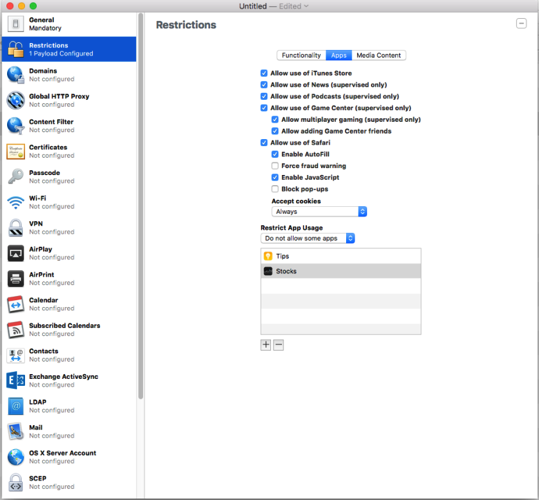 Create a configuration profile in Apple Configurator 2.2 Beta with a restrictions payload set to “Do not allow some apps” under “Restrict App Usage” in the Apps section of the Restrictions.

Add the necessary bundle IDs like com.apple.tips, com.apple.stocks, then plug in your device and apply the profile.

Once done, the icons will simply disappear from the home screen.

You must configure the General section in order to save the configuration profile. When you plug in your device, right click it, then Add > Profiles… Then navigate to the profile you just saved. You might have to then accept the install on the iOS device itself.

Here are some of the Bundle IDs for iOS’ default apps:

You can find out additional Bundle IDs at this website.