How to Hijack Times Square Screens with your iPhone 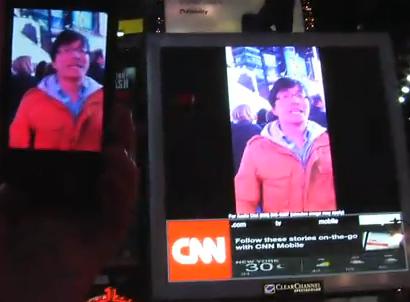 …or not. I’m calling this a brilliant fake, similar to the giant iPhone table from a while back.

“The way it works is pretty simple: plug in my transmitter into the headphone minijack of an iphone 4 and play back any video clip. you can play it through the ipod feature or through the camera roll. the transmitter instantly sends the video signal to the video repeater and the video repeater overrides any video screen that it’s being held next to. it doesn’t matter what shape or size the hacked screen is because the hack video will simply keep its correct dimensions and the rest of the hacked space will stay black.

i chose times square for my demo because it has lots of video screens to try it on. it is also one of the most monitored and secured areas in new york city and that made it that much more fun :). you can see in my video that the repeater is pretty powerful but the signal is not very stable yet. i’m working on that. i will post a new video later this week explaining how i made this prototype.”

Check out this video below, and let me know your thoughts. Fake or real? 😉

Google today unveiled its long-rumoured smartwatch, the Pixel Watch, during the 'Made by Google' launch event. Pixel Watch features a circular design with a curved top that gives it a dome-like appearance. The screen is protected by a Custom 3D Corning Gorilla Glass cover that's tough and scratch-resistant. Google's Pixel Watch comes with an always-on...
Nehal Malik
6 mins ago