How to: Watch the CFL Grey Cup 2021 Live Stream: Blue Bombers vs Tiger-Cats 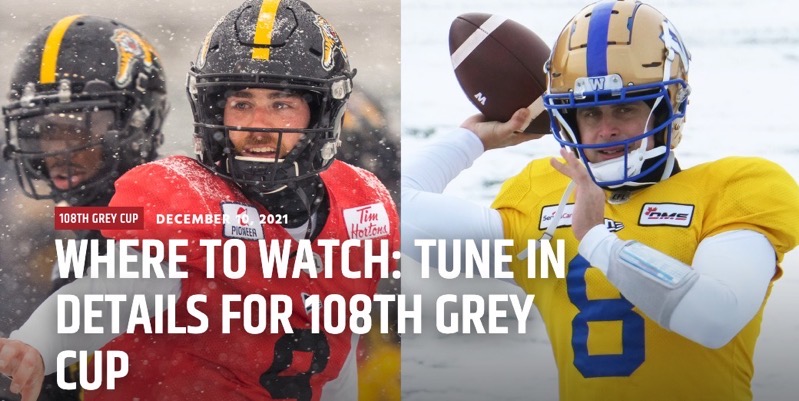 The 108th Grey Cup is set to take place on Sunday, December 12, 2021, between the Winnipeg Blue Bombers and Hamilton Tiger-Cats, a rematch of the 2019 final.

Due to COVID-19, the 2020 CFL season was cancelled and the 2021 season was delayed and shortened.

This year’s 2021 Grey Cup will be hosted in Hamilton, Ontario, at Tim Hortons Field.

Here’s how to watch the CFL Grey Cup 2021 Live in Canada and other countries below:

On television, TSN will have live coverage starting at 10am PT/1pm ET, as part of the network’s 5-hour pre-game show. The final between the Tiger-Cats and Blue Bombers starts at 3PM PT/6pm ET on Sunday.

Existing TSN and TSN Direct subscribers can stream the 108th Grey Cup live via the TSN app and on the web at TSN.ca/Live. French viewers can tune into the RDS app.

You can live-stream the CFL Grey Cup final for $7.99 CAD online at cfl.yaretv.com.

You can also listen to the 2021 Grey Cup final via SiriusXM, with English coverage on Canada Talks (channel 167). TSN Radio will have live coverage of the Grey Cup from 4PM ET from Bell Media Radio family stations.