An interesting new report compiled by iOS developer Craig Hockenberry explores how well the Apple Watch works when it’s exposed to water, and how Apple can further improve the usability of its Workout app, especially when tracking water sports. While Apple does not recommend submerging Apple Watch, and mentions a water resistance rating of IPX7 under IEC standard 60529, Hockenberry notes that the rating actually implies the watch can be submerged in 1 meter (3.3 feet) of water for up to 30 minutes. 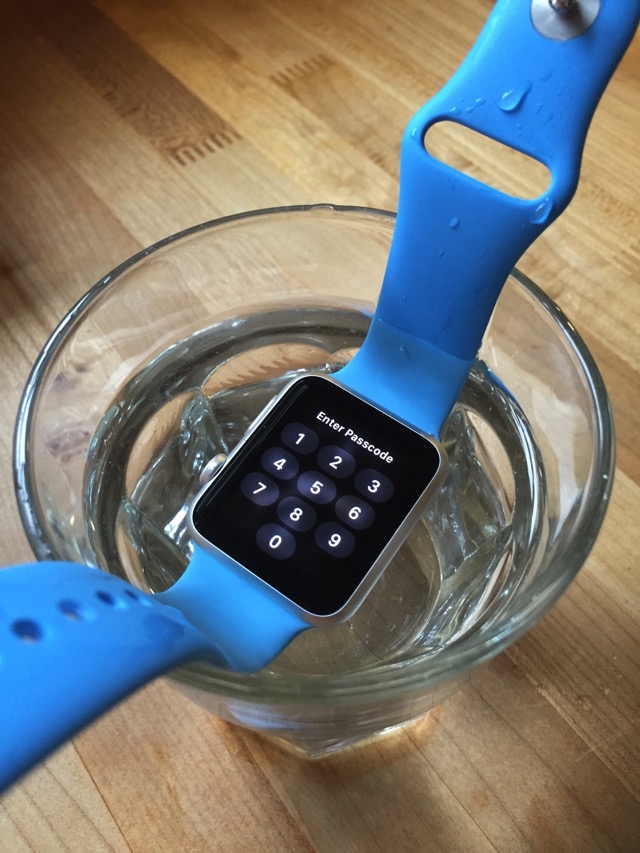 Hockenberry says that the Apple Watch’s capacitive touch screen doesn’t work while the device is under water, nor does Force Touch. As a result, the Workout app can’t be accessed in the water and occasionally, water can activate a swipe on the display, swapping from the timer to the calorie view. “Unless you’re swimming in distilled water, the touchscreen on your Apple Watch just won’t work”, he says, adding that anyone can see this effect by just putting the watch in a glass of water and trying to enter the passcode.

“There’s no way to pause the workout. You have to start the workout before getting in the water and stop after you’ve gotten a chance to dry off. For an ocean swim, this screws up your timing: you don’t really start swimming until after you get beyond the surf break. If there’s heavy surf, this can take several minutes. Workout data is being collected while you’re standing and waiting for waves to clear.

With the arrival of native apps in watchOS 2.0, more advanced swimming apps are possible. But since using the watch in water is not recommended, Apple may choose to reject swimming apps. Given the inherent difficulties of using a capacitive display in an electrolyte, we may be waiting a long time”.

He then suggests that Apple could include an option to enter workouts manually, improve integration of the watch’s side button to sidestep the swiping and Force Touch issues, and streamline the process to end a workout session to make it easier on tired muscles to press tiny buttons correctly.

To read the comprehensive report, head over to the source.

The all-new Apple Watch Ultra officially went on sale last week, debuting the biggest change to Apple Watch yet, with the watch sporting features targeting extreme athletes. The Apple Watch Ultra has been designed to compete with the likes of Garmin, Suunto, Polar, and Coros, and boasts a suite of high-end features and improvements, including...
Usman Qureshi
23 mins ago