Earlier this week, the official Huawei account was busted for using Twitter for iPhone instead of tweeting from an Android-based Huawei smartphone. Although the tweet was deleted shortly after the screenshots of the blunder spread across social media, thanks to the unofficial Twitter police Marques Brownlee aka MKBHD. 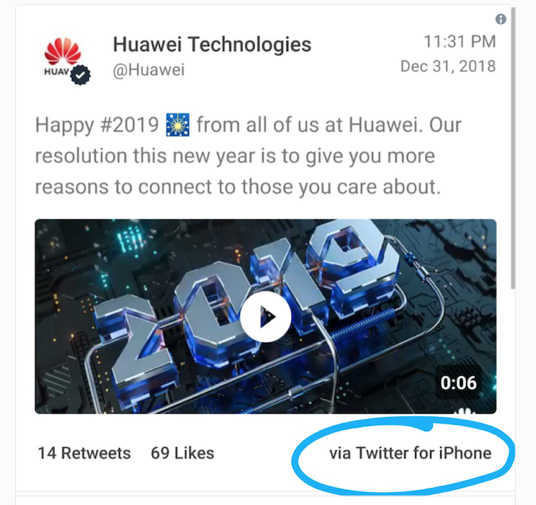 Today, an internal memo by the Chinese company obtained by Reuters has shown that two employees responsible for the tweet have been punished by Huawei. “The incident caused damage to the Huawei brand,” said corporate senior vice-president and director of the board Chen Lifang.

According to the memo, the blunder showed “procedural in compliance and management oversight”, as a result of which the two employees responsible for the mistake have been demoted by one rank. In addition to that, the company has also reduced their monthly salaries by 5,000 yuan, which is roughly US $728:

The mistake occurred when outsourced social media handler Sapient experienced “VPN problems” with a desktop computer so used an iPhone with a roaming SIM card in order to send the message on time at midnight, Huawei said in the memo.

Twitter, like several foreign services such as those from Facebook Inc and Alphabet Inc, is blocked in China, where the Internet is heavily censored. To gain access, users need a virtual private network (VPN) connection.

Huawei, which recently overtook Apple to become the second largest smartphone vendor globally, has not yet issued an official public statement regarding the issue.