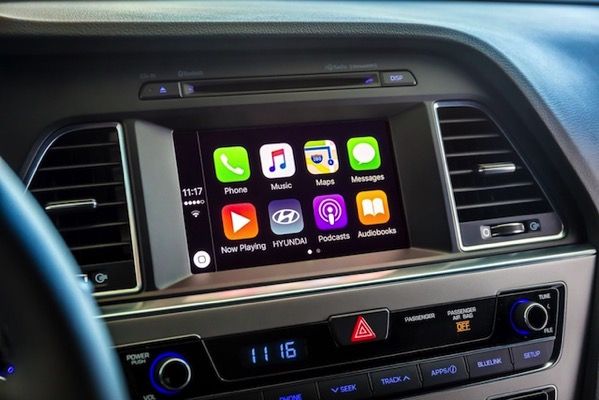 Hyundai has today expanded its free Apple CarPlay integration offer to several more existing models via a software update, completing the rollout of smartphone integration across the 2017 model year lineup (via PRNewswire). The do-it-yourself installation, which is compatible with CarPlay as well as Android Auto, is now available free of cost through MyHyundai.com. The software will also be available at Hyundai dealerships nationwide for an installation fee.

“We are very pleased to be able to expand the availability of multimedia system updates to the owners of these additional vehicles,” said Barry Ratzlaff, executive director, digital business planning and connected operations, Hyundai Motor America. “Delivering the update through the MyHyundai.com owner website has proven to be an effective way to support Hyundai owners.”

2017 Santa Fe and Santa Fe Sport are now being built with both CarPlay and Android Auto support and will arrive at dealerships soon. All other 2017 model Hyundai vehicles with eligible Display Audio or Navigation systems include both smartphone integration solutions from launch.

To complete the software upgrade, owners need their VIN number and the SD card from their Navigation system. MyHyundai.com also has installation guides and videos to walk customers through the process.

Update: This update looks to be for Hyundai models in the U.S. only; we’ll confirm if and when this comes to Canada.