The developers note that since the head-forward ‘tech-neck’ position causes pain and even injury in worst cases, they came up with i90 glasses, which enable you to enjoy your tablet and smartphone for hours with your head up straight, looking forward. Just put these on like you would a normal pair of glasses, and you’re good to go. You’re sightline will be refracted 90 degrees downward, hence the name ‘i90’. 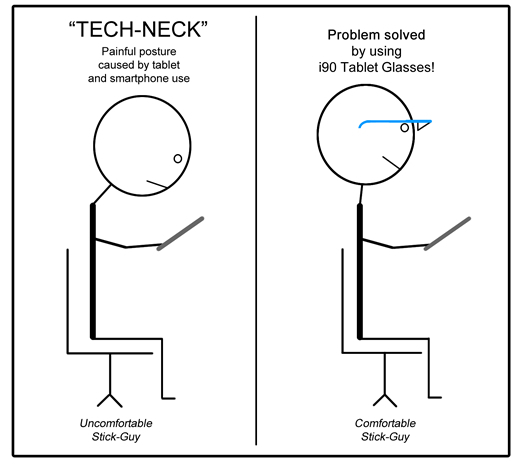 Here’s why the developers of i90 think you need a pair of these tablet / smartphone glasses:

“Neck and back pain caused by the head-forward posture we all seem to find ourselves in when we use electronics (often called “TECH-NECK” or “FACEBOOK POSTURE”) is becoming a public health epidemic. Holding your head forward adds severe stress to the spine, which can lead to pain in the neck and upper back, and other problems such as headaches and even respiratory difficulties. Use i90 Tablet Glasses when you’re using a tablet, smartphone or e-reader while you commute by train, when you’re in bed, on long (or short) flights, or in your car seat while your parents are talking amongst themselves in the front seat.” 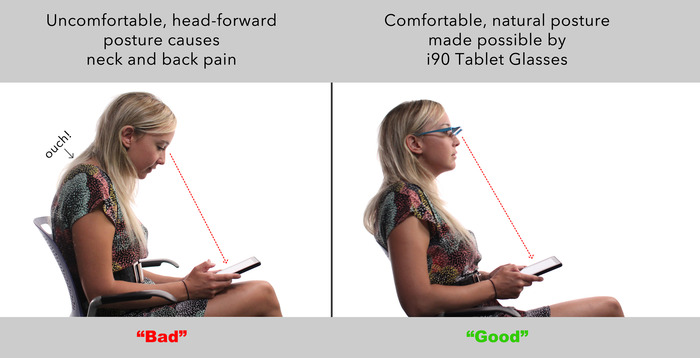 The glasses have also been designed to be wide at the front to accommodate most reading glasses. So far, the project has raised nearly $8,000 of its $45,000 goal with 35 days still to go. If you’d like to make a pledge ($75 or more), simply head over to their Kickstarter page.