Update 1: A fix is now in Cydia, called “iBooks Fix”. Click here to find out how to install it.

This week, Social Apples reports that a change made in the reent Apple iBooks app detects whether an iDevice has been jailbroken, and if so, refused to open content purchased from the iBookstore!

Since using the greenpois0n jailbreak, I have been unable to open some of my iBooks that I rightfully purchased from the iBook Store. I thought it was a problem with the downloaded books, so I re-downloaded them. That didnÂ’t work so I removed the iBooks from my iPhone and re-syncÂ’d them from my computer… still no luck. Then I stumbled on a tweet from @comex tonight that really blew my mind.

If you have been victim of the described issue, once the binary successfully runs, the following message appears on the device:

There is a problem with the configuration of your iPhone. Please restore with iTunes and reinstall iBooks. 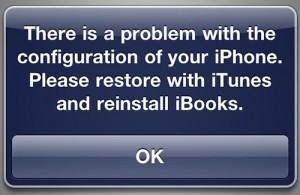 If followed, restoring the device via iTunes removes the jailbreak, and brings the iDevice back to ‘normal’, within Apple standards.

Also, recent updates have indicated that this jailbreak detection has been present since iOS 4.0 and is part of the fairplay DRM check. It has only recently hit the news as new jailbreak methods have opened up Apple’s restrictions just enough to trigger the blocks.