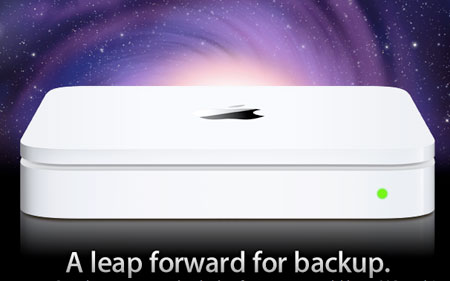 Today is the eve of WWDC 2011, and predictions and last minute scoops have hit the interwebs. Cult of Mac claims sources have informed them iCloud will utilize a combination of refreshed Time Capsules for backups, rather than Apple’s North Carolina data centre:

According to the source, Apple has developed a system to make usersâ€™ Time Machine backups available through its new iCloud service…

…Files saved on your computer are backed up instantly to Time Capsule, which makes them available to remote Macs and iOS devices.

If you make any changes on any computer, those changes are updated through iCloud and stored on your Time Capsule. The Time Capsule archives and serves up your files even when your computers are off. When you get home and fire up your desktop computer or laptop, the files are automatically synced across your devices.

This service will also allow you to upload photos and videos from your iPhone or iPad to your Time Capsule. The media will be stored on the device and be made available for other devices to sync. iCloud is the â€œconduitâ€ through which everything moves, the source said.

So essentially, this source claims Apple wants people to invest in their upcoming Time Capsule units, to act as a hub for storage and syncing of files. I have two problems with this. First, it would mean users would require the purchase of Time Capsules which are not ‘cheap’ by any means (what about existing units? Would they be rendered useless?). Secondly, what will happen once your Time Capsule has reached capacity? I could see the option to purchase your own external drive to plug in like existing Airport Extremes, but that doesn’t seem like an ‘easy solution’. Clearly, there needs to be some sort of unlimited storage capacity.

Then there is the issue of privacy, as most users probably aren’t comfortable storing their entire backups in the hands of a third party. However, popular online services like Crashplan have been around for a while. I’m still betting on Apple to blow us away and reveal the sheer power of their data centre tomorrow.

Would you trust your backups to iCloud, and also the cost of a Time Capsule? If Apple is going to make it $99 like the new Apple TV, then maybe we’ll have something to talk about.

The Canadian Radio-television and Telecommunications Commission (CRTC) wants feedback from Canadians on the proposed price increases on basic TV packages, beyond mandated price caps. The CRTC said on Wednesday the request for comments comes “in response to an application filed by a group of television service providers to increase the price cap for the basic […]
Gary Ng
4 mins ago