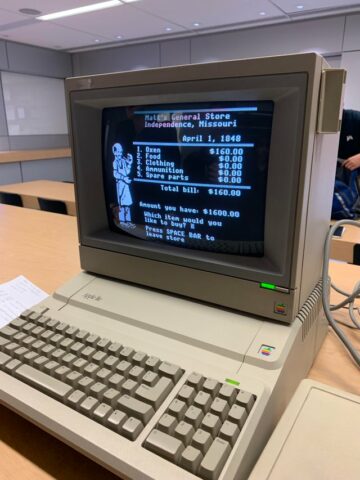 Image via Reddit: Oregon Trail on an Apple IIe Computer

The original was created on December 3, 1971, by three undergraduate teaching candidates at the Jordan Junior High School in Minneapolis, Minnesota.

The Oregon Trail was revolutionary, predating the rise of the personal computer by about five years and going on to shape the advent of video games as we know them today.

The original game ran on a teletype machine, which was essentially a primitive computer keyboard hooked up to a printer. The game was entirely text-based, had no images or graphics, and told the story of adventurers on a quest for westward expansion.

Throughout the decades, the game has been refreshed and reimagined a number of times, and remains an important part of video game history.

Fast Company has a deeper dive into the game, with interviews from creators of the original title, Don Rawitsch, Bill Heinemann, and Paul Dillenberger. Here’s a snippet:

Thus began a mad dash to code the game in BASIC at a teletype at Bryant Junior High, where Heinemann and Dillenberger taught. The unit sat in an anteroom to the janitor’s closet, where there was space for just the teletype and one extra chair.

Over a week and a half, the trio laid out a basic narrative in which players loaded up a covered wagon with food and supplies and lit out from Independence, Mo., in April 1848, for Oregon’s Willamette Valley. Day by day, unforeseen difficulties arose such as illness, bandits, and bad weather, and players tried their hands at a selection of mini-games asking them to hunt and ford rivers. Players won by making it all the way to western Oregon with at least a few members of their party still alive.

Gameloft has its version of The Oregon Trail that brings the story and essence of the original into a graphical world fit for today’s gamers. The title is available on the App Store for iPhone, iPad, Mac, and Apple TV through Apple Arcade, a game subscription service from Apple that originally launched back in 2019 with 50-something games.

Many Canadians remember playing The Oregon Trail on Apple II computers growing up.

For some interesting Saturday reading, check out Fast Company‘s recent piece on The Oregon Trail for the game’s 50th anniversary — the publication called it “the most influential educational video game ever created.”