According to IDC’s latest mobile phone report, Apple has continued to skim the smartphone cream during Q2, despite the fact that it has historically been the Cupertino company’s slowest quarter of the year. Meanwhile as Fortune’s Philip Elmer-DeWitt notes, it hasn’t exactly been “a walk in the woods” for the dominant Android makers either. 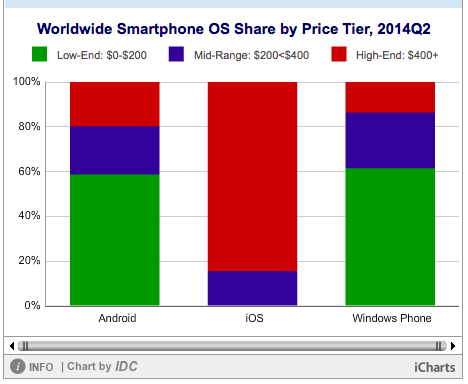 According to IDC’s numbers, 58.6% of all Android smartphone shipments worldwide cost less than $200 off contract. So while Android has been “reaping huge gains within emerging markets,” in the words of IDC’s Ramon Llamos, it hasn’t been yielding huge profits. Apple meanwhile received a boost from shipments of its high-end devices towards the end of the quarter, resulting in higher volumes compared to previous quarter.

“It’s been an incredible upward slog for other OS players – Windows Phone has been around since 2010 but has yet to break the 5% share mark, while the backing of the world’s largest smartphone player, Samsung, has not boosted Tizen into the spotlight,” said Melissa Chau, Senior Research Manager with IDC’s Worldwide Quarterly Mobile Phone Tracker. “The biggest stumbling block is around getting enough partnerships in play – not just phone manufacturers but also developers, many of which are smaller outfits looking to minimize development efforts by sticking to the two big ecosystems.”

While Android and iOS both realized gains from a year ago, the rest of the market recorded losses, according to IDC.