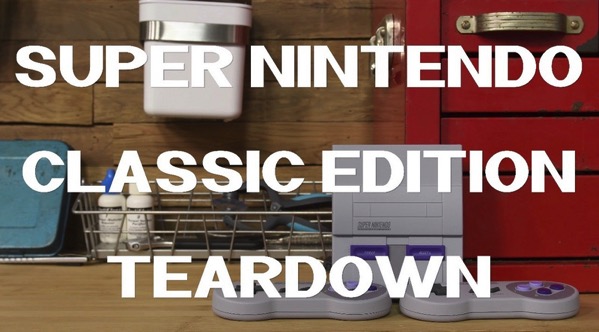 Last month, Nintendo released the Super NES Classic Edition for a retail price of $99.99 CAD with 21 pre-installed games, although hackers have already managed to hijack its firmware and add their own game titles. Now, the tear down experts over at iFixit have taken apart the highly-coveted mini-console, which made them just as nostalgic as playing the games on it.

“We’re not gonna lie. We played with our SNES Classic for a while. Then we remembered how bad we are at Super Mario World and moved on to a game that we’re actually good at—the teardown game.

Taking apart the Super NES Classic Edition made us just as nostalgic as playing the games. It has got a retro, accessible construction that reminds us of the original 90s-era units. No glue. No proprietary screws. No anti-tampering stickers in sight. Just four standard Phillips screws under four easy-to-remove rubber feet, and you’re in.”

The construction of the SNES continues with the classic theme. You can easily remove the heat sink/EMI shield and free a few connectors for the controllers, whereas pulling loose a ribbon cable for the power buttons exposes the mini-board of the Super NES Classic Edition. Since the games are pre-loaded instead of on cartridges, the board also features some new silicon.

The new SNES Classic Edition earned an 8/10 on iFixit’s repairability scale. They knocked points off for the lack of a repair manual, and because the HDMI and USB ports are soldered to the mainboard.

Check out the quick teardown video for the console and the controller embedded below: