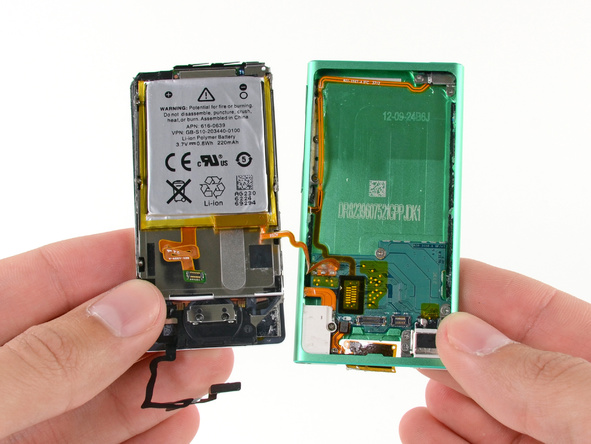 The 7th generation iPod nano’s internals show a Texas Instruments touchscreen controller, NAND flash from Toshiba alongside a a few Apple-branded chips. Many components including battery, lightning connector and headphone jack are soldered to the logic board, which led to a 5 out of 10 repairability score.

The battery is soldered directly to the logic board and adhered to the back of the display. Replacing it will be a doozy.

The LCD and digitizer glass are not fused together, allowing replacement of either component separately.

As in the iPod Touch 5th Generation, many of the important components—including the battery, Lightning connector, and volume controls—are soldered to the logic board. So if you bend your Lighting connector or break your volume control, you’re stuck with replacing the whole suite of components.

Here is a full list of parts found in iPod nano 7G: