If you haven’t noticed, Google has released an improved beta version of their iGoogle page for the iPhone (after iGoogle abruptly disappeared). What’s new? Well, this time around it’s much faster, plus you will see more of your iGoogle gadgets and your tabs too.

One major new features is the ability to read article summaries right on the page from feed-based gadgets. You can rearrange tabs but it won’t change them on your computer. The useful thing about the iGoogle page for the iPhone is that you can read up on various news sources quickly and efficiently.

You can visit the new improved iGoogle page by visiting http://www.igoogle.com on your iPhone, then clicking “Try the new Mobile iGoogle!”. Check out this screenshot and video below: 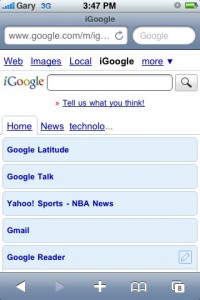 I congratulate the Google team for continuing to update these optimized pages for the iPhone. However, I am still patiently waiting for push Gmail for the iPhone–when is that coming? 🙂

Apple’s 10th generation iPad launched this year to some mixed reviews, and today, the experts over at iFixit have given it their signature teardown treatment. “It’s such an odd device – in both good and bad ways,” says iFixit. "A few genuine leaps forward for consumers sit alongside some truly baffling design choices." "You’d expect...
Usman Qureshi
16 mins ago