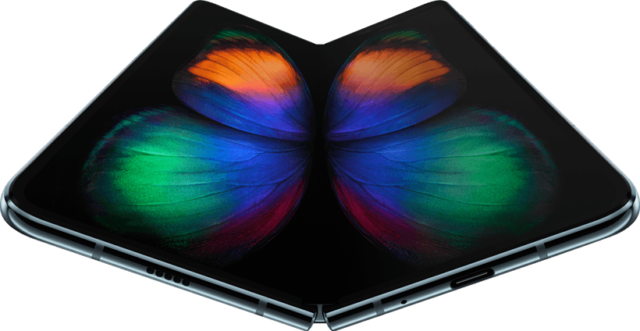 The internet has been buzzing by the return of clamshell foldable phones since Motorola revealed its return to the Razr brand. Though, many have been eager to hear of Samsung’s plans to tackle the clamshell model, under the Galaxy Fold name.

It may appear as though we have gotten our first look at the long-rumoured Galaxy Fold clamshell. MacRumors has reported that leaked images of the modernized clamshell phone may have been released on Weibo. A mobile leaker, Ice Universe, picked up the scent of the photos posted on the Chinese microblogging website. He later shared the four images which have surfaced on Twitter.

The alleged photos depict the Galaxy Fold to be no bigger than the size of your palm when closed. The design is very inline with older flip phones, but with Samsung’s modern key design points. When closed, you’ll see two rear cameras next to a digital clock. The photos also show the smartphone open, a front-facing camera can be seen.

While we always encourage to take rumours and leaked photos with a grain of salt, there is some credibility with the photos above. As MacRumors points out, Samsung has actually shared concept designs during the Samsung Developer Conference which line up with the photos posted on Weibo.

The new clamshell-style Galaxy Fold has been suggested to be revealed alongside the S11 in February. According to a Bloomberg report, both phones would sport the same five-camera setup. This is where the leak begins to fall in merit. Assuming Samsung is still set on releasing a foldable with a bevy of camera features, the leaked photos only appear to have three cameras in total. Although, it’s reasonable to consider Samsung has since reeled in its plans and pivoted towards a more simplistic design.

We won’t know for certain until Samsung’s Unpacked keynote in February. The clamshell-style Galaxy Fold is rumoured to be sold at a cheaper price point in comparison to Samsung’s first Galaxy Fold, which is currently sold for $2,599 CAD.