iMessage App Store Has Grown to Over 1,650 Apps and Sticker Packs

Just over a week after its launch, the iMessage App Store has grown to over 1,650 apps and sticker packs, which is more that what the original iPhone had at launch, TechCrunch is reporting. Even the iPad had a total of 1,000 apps ready at the time of its debut, although the Apple Watch had over 3.500 apps in the Watch App Store when it debuted last year. 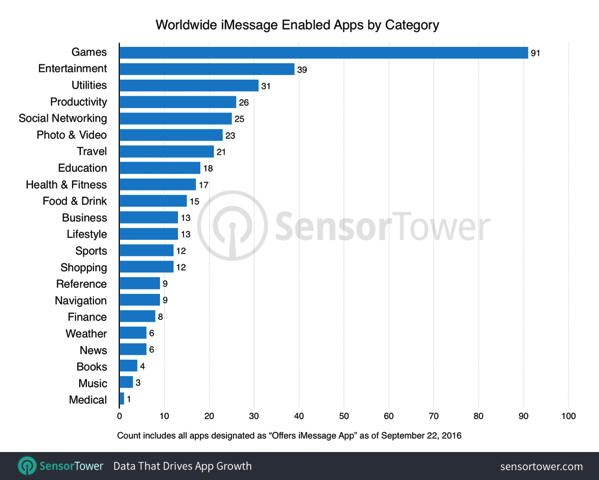 A new report from Sensor Tower suggests that the most popular type of mini mobile application is the “sticker pack”. The iMessage App Store currently hosts 1,251 of these sticker packs, while there are 402 non-sticker iMessage apps. The source notes that instead of seeking out standalone apps, many people are looking for add-ons that enhance their mobile messaging experience. So far, these have included everything from custom keyboards to apps for sharing GIFs, emoji and stickers.

The iMessage App Store is Apple’s latest attempt at building a platform that allows third-party developers to market their software to the sizable iPhone user base. It arrives at a time when the original iOS App Store has become so cluttered with out-of-date and abandoned applications – so much so, that Apple has implemented a store-wide cleanup process that could impact hundreds of thousands of apps.

According to Sensor Tower’s data, of the 402 non-sticker apps on the new storefront, the largest category is games. There are already 92 games available for download, which almost 2.5 times the number of apps in the second-largest category, Entertainment (39).

Although we now have an idea of what developers are focusing on building for the iMessage App Store, we don’t yet have any data to find out which apps consumers are actually downloading.