Krishna Kalyan, resident of Hyderabad, India decided to bring in the New Year with an impressive iPhone 4 cake. We have seen previous iPhone and Apple-releated cakes in the past, but this could be the first and best iPhone 4 cake we’ve seen yet.

As seen in the photo (taken by an iPhone, hehe), the iPhone 4 display is extremely detailed. Icons are virtually perfect, with some apps featuring push notifications waiting to be read! The display further has the classic “bubble” background, battery level and even the wireless signal, which is at full-bars by the way!

As for other areas, the Home Button looks like its made from a giant Smartie and the dock connector/perimeter of the “device” is covered in luscious frosting….*drool*.

The only thing that could potentially make this cake even more impressive would be some Folders! Other than that, I’m interested to see how FaceTime works and if Antennagate is still an issue. In any case, that is sure a tasty way to bring in 2011. 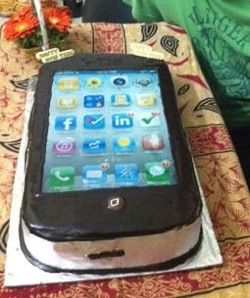