During this year’s WWDC, Philip Schiller, Senior VP of Worldwide Product Marketing introduced in-app purchases. This feature will allow such thing like magazine renewals inside apps, or the purchase of additional songs in apps like Tap Tap Revolution. Well, we have some very interesting news courtesy of an anonymous iPhone Developer via email.

Free Apps To Get In-App Purchasing?

It looks like Apple has just sent out an email to iPhone Developers that in app purchasing is now available for free apps. Here’s what the email had to say: 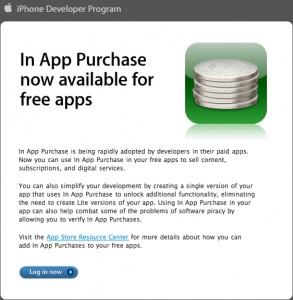 How Will This Change The App Store?

So it looks like this new feature is trying to persuade iPhone Developers to reduct “lite” versions of applications (which flood the App Store) and also combat software piracy, since In App purchases are verified. This is all very interesting because I thought I remember Phil Schiller and Steve Jobs both emphasizing that “free apps will remain free”. Apple is blurring the lines between the definition of a free app versus a paid app. Looks like they’re moving in the direction of paid apps either way.

Does this make sense to you? Is Apple looking for other streams of revenue by allowing In App purchases within free apps? If you’re an iPhone Developer, we’d love to hear your thoughts on this.